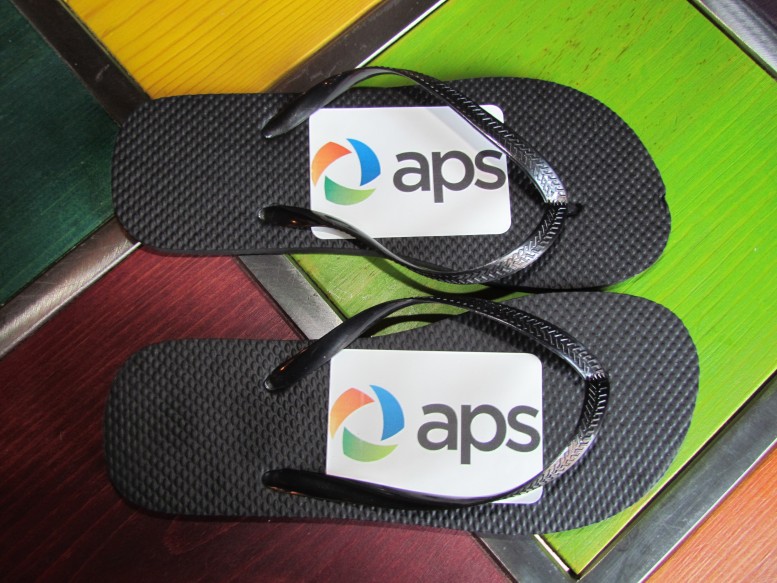 (PHOENIX) Solar supporters dressed as flip flops and delivering flip flops sent APS a message June 26. The utility monopoly is asking the Arizona Corporation Commission to quadruple an existing tax on solar power, breaking repeated promises to the public and shareholders to hold off on such requests until a formal rate case. The tax on rooftop solar customers would be about $21 a month.

To mark this blatant ‘flip flop’ and to commemorate June 26th, the day when the temperatures reached 122 degrees in Phoenix in 1990, solar supporters turned up the heat and delivered 200 pairs of flip flops to APS at its corporate headquarters in downtown Phoenix.

Pictures and a video are attached.

Supporters hope the utility will stay cool with summertime footwear while at the same time reminding the utility and regulators that they went back on their promise to hold off on any requests for new solar taxes until next year’s rate case.

In April, APS requested new solar taxes without the benefit of a rate contradicting repeated statements from APS officials in which they pledged to revisit taxes on rooftop solar at the next rate case. APS should learn from fellow utilities UNS and TEP, which have withdrawn solar rate proposals in order to file them in the proper venue, a rate hearing.

In at least three quarterly earnings meetings, Arizona Public Service executives said they would not revisit taxes on rooftop solar customers until the next formal rate hearing, which is scheduled for mid-2016.

Further, APS made a point to tell the media and the Commission itself that it would not seek to raise the solar tax outside of a rate case, preferring a broader discussion of rates for everyone to a narrow discussion of solar taxes.

Several members of the Arizona Corporation Commission have also made public statements that requests for any fees on rooftop solar customers should be heard in a formal rate hearing.

T.U.S.K. believes that rooftop solar is similar to a charter school—it provides a competitive alternative to the monopoly. Monopoly utilities aren’t known for reducing costs or for driving business innovation, but the Arizona solar industry is. Solar companies have a track record of aggressive cost reduction in Arizona. The more people use rooftop solar, the less power they need to buy from the utilities. Energy independence for Arizonans means smaller profits for the utilities, so they are doing everything they can to stop the spread of independent solar.